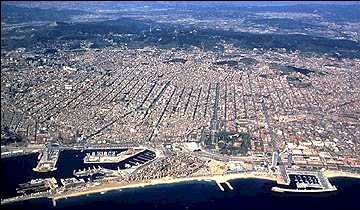 For most people, Barcelona is synonymous with Modernisme, and in particular the enchanting buildings of Antoni Gaudí. It is also famed for its innovation and design, and leads Spain in contemporary art and architecture. At the heart of this city of cutting-edge creativity is the Gothic Quarter, with its well preserved medieval architecture. Barcelona’s draw is also in its shops, bars, clubs and street life – any visit has to include a stroll down Las Ramblas.

Barcelona can easily be combined with a beach holiday in one of the resorts a short way north or south of the city.

In a privileged position on the northeastern coast of the Iberian peninsula and the shores of the Mediterranean, Barcelona is the second largest city in Spain in both size and population. It is also the capital of Catalonia, 1 of the 17 Autonomous Communities that make up Spain. There are two official languages spoken in Barcelona: Catalan, generally spoken in all of Catalonia, and Castillian Spanish. The city of Barcelona has a population of 1.510.000, but this number spirals to more than 4.000.000 if the outlying areas are also included.

The capital of Catalonia is unequivocally a Mediterranean city, not only because of its geographic location but also and above all because of its history, tradition and cultural influences. The documented history of the city dates back to the founding of a Roman colony on its soil in the second century B.C. Modern Barcelona experienced spectacular growth and economic revival at the onset of industrialization during the second half of the 19th century. The 1888 World's Fair became a symbol of the capacity for hard work and the international outlook projected by the city. Culture and the arts flourished in Barcelona and in all of Catalonia; the splendor achieved by Catalonian modernism is one of the most patent displays.

Barcelona, more than just a single city, is really a collection of multi-faceted and diverse cities. The visitor unfamiliar with its history might be surprised that such a modern and enterprising city preserves its historic Gothic center almost intact, or by the curious contrast between the maze of narrow streets and the grid-like layout of the Eixample, the urban planning «Enlargement» project of the end of the 19th century; or that beside a modern high-rise, you can also find a quaint square where the most outstanding decorative element is a chimney, an echo of the old factories that were installed there in the past.

Barcelona offers the visitors an unforgettable experience. This is a modern city, yet at the same time rich in cultural and historical heritage — the architecture of Gaudi, the Gothic Quarter, the Roman ruins, the famous Ramblas, as well as the the Picasso and Dali museums and all the beautiful buildings of the modernist period, which fill the centre of this outstandingly beautiful and atmospheric city.

Of course, Barcelona also has 4 kilometres of sandy beaches, a wonderful Mediterranean climate, with warm summers and mild winters, yet at the same time the stunning scenery and ski resorts of the Pyrenee Mountains less than 2 hours drive away.

Whether you are coming for just 1 week or 36 weeks, whatewer your interests and tastes, and whichever time of year you choose to make your visit, Barcelona is sure to thrill and enchant you. This is truly a city for all tastes and all seasons. Experience it with us. We look forward to seeing you here soon!